The US Open’s Tennis Plays For Peace Campaign Raised $1.2 Million For The Relief Effort In Ukraine. 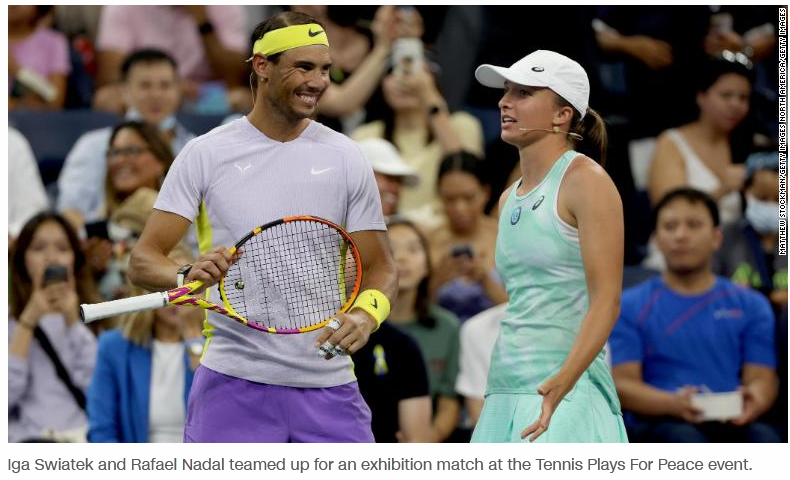 On Wednesday, the US Open held its ‘Tennis Plays for Peace’ event for Ukraine relief ahead of the start of the year’s final grand slam event. The event raised $1.2 million, according to the United States Tennis Association (USTA). Participating in the event held in New York were Rafael Nadal, Iga Swiatek, John McEnroe, Coco Gauff, Carlos Alcaraz, Leylah Fernandez, Felix Auger-Aliassime, Jessica Pegula, Matteo Berrettini, Maria Sakkari, Stefanos Tsitsipas, Taylor Fritz, Frances Tiafoe and Tommy Paul. In one of the highlights of the evening, Nadal and Swiatek took on McEnroe and Gauff.

In an interview with Reuters, Swiatek said: “Because Ukraine is right next to my country and because we as Poles are really united and helping, and I want to use every opportunity to show people that we all can be united.”

US star Coco Gauff was among the players attending the event, as well as Ukrainian players Dayana Yastremska, Katarina Zavatska and Daria Snigur — as well as former players Sergiy Stakhovsky and Olga Savchuk — at the Louis Armstrong Stadium. 12-year-old Ustyn Chornyy of the Ukrainian Chorus Dumka of New York sang the Ukrainian national anthem.

The United States Tennis Association announced that Victoria Azarenka of Belarus would not participate, saying: “In the last 24 hours, after careful consideration and dialogue with all parties involved, Victoria Azarenka will not be participating in our ‘Tennis Plays for Peace Exhibition’ this evening. Vika is a strong player leader and we appreciate her willingness to participate. Given the sensitivities to Ukrainian players, and the on-going conflict, we believe this is the right course of action for us.” The event comes after the Ukraine Ministry of Youth and Sports announced in a statement on Tuesday that 133 Ukrainian athletes and coaches have died to date in the six months of the Russian invasion of the country.