Russian And Belarusian Players Have Been Allowed To Compete At The US Open. 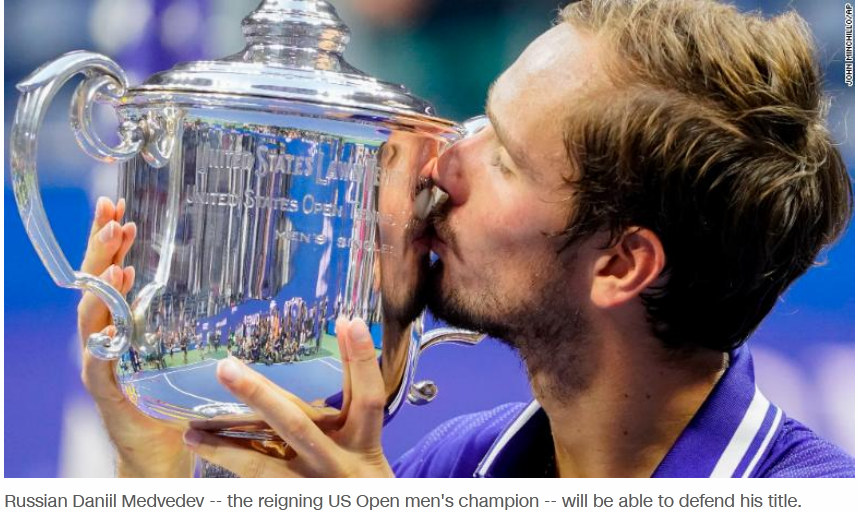 The UTS announced that both the Russian and Belarus Davis Cup teams will be invited to participate in next year’s US Open tennis competition, despite Russia’s ongoing occupation of Ukraine.

The United States Tennis Association, or USTA, announced this week that it will allow Russian and Belarusian players to compete in the U.S. Open using a neutral flag and the tournament’s logo. This decision comes after Wimbledon, one of the four grand slams, became the first elite tennis event to ban Russian and Belarusian athletes from its competition earlier this month. The men’s ATP and women’s WTA Tours have since stripped Wimbledon of its ranking points in response to the move. The USOpen will adopt the approach used by the ATP and the WTA since the invasion where Russian and Belarusian players compete under a neutral flag. As a result, current world No 1 and reigning men’s singles champion Daniil Medvedev will be able to defend his title at Flushing Meadows next month. He defeated Novak Djokovic in straight sets in last year’s final to claim his maiden grand slam.

Belarusian woman Aryna Sabalenka, who won the women’s semifinals in the Australian Open last year, has also been permitted to compete in the Ladies’ Singles tennis tournament.

The USTA announced yesterday that it will allow players from Ukraine and other nations with governments currently in conflict with other countries to compete at the 2022 US Open. In an interview with The Associated Press, USTA CEO Lew Sherr said that while the decision to bar players was difficult, he believed it was necessary because of “concern about holding the individual athletes accountable for the actions and decisions of their governments.” A statement released by the USTA condemned the invasion of Ukraine and recognized that “each organization has had to deal with unique circumstances that affect their decisions.” “Based on our own circumstances, the USTA will allow all eligible players, regardless of nationality, to compete at the 2022 US Open.” The USTA committed itself to providing “significant financial support” to the humanitarian effort in Ukraine.

The USTA will take part with the players and both the Tour s’ cooperation to stimulate the ‘Tennis Plays for Peace’ program. The US Open starts on August 29 in New York City.