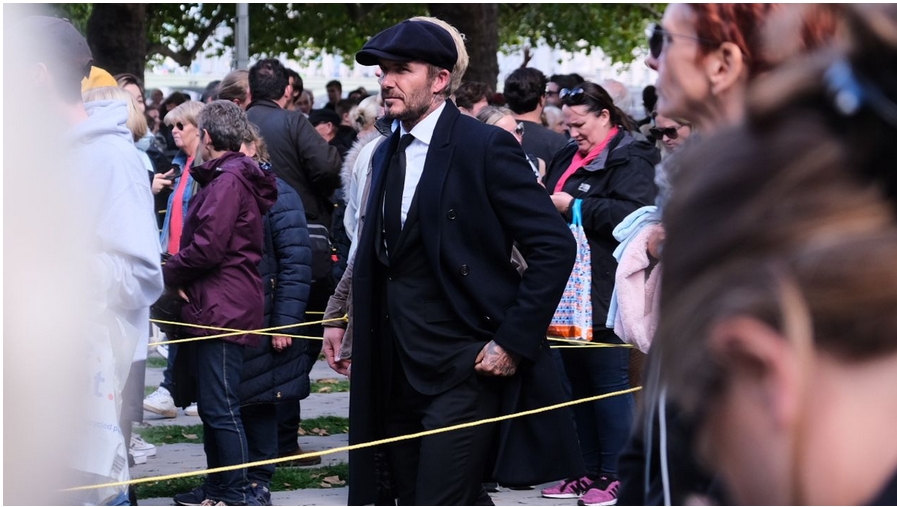 The news of the death of Queen Elizabeth II broke as David Beckham was spotted in the queue for her lying-in-state in London. Speaking to reporters at the queue, Beckham said he had been waiting with members of the public for more than 12 hours. “We all want to be here together, we all want to experience something where we celebrate the amazing life of our Queen,” he said. “You know something like this today is meant to be shared together. So, you know the fact that we’ve been here. We’re eating Pringles. We’re eating Sherbet Lemons, sandwiches and coffee,” he continued. Speaking to a reporter from ITV News about his decision to come on behalf of his grandparents who he said would have queued if they were still alive, Beckham said: “I grew up in a household of royalists [sic] and obviously my grandparents would have been here if they were still alive so it means a lot to me today and obviously my boys as well. You know they’ve been up since 6am this morning so we just wanted to make sure that we got here and saw everything.”

Beckham recounted being honored to have met the Queen on a number of occasions and said that he felt lucky to have played for the English national football team. “You know I always wanted to represent my country, to be captain in my country, and every time that we stood there when we wore those Three Lion shirts, and I had my armband and we sang, you know, ‘God save our Queen.’ That was something that meant so much to us,” he said. Dressed in a black suit, navy coat, and flat cap, Beckham said that although he waited in line more than 12 hours to see the Queen, his knees were ok but his back wasn’t as good.

One woman who had queued alongside Beckham for hours told reporters that she had “big respect” for the sportsman, and that he had paid his respects however he wanted. The queue snakes from Westminster Hall, where the late monarch’s body is lying in state, for miles along the south bank of the River Thames. It stretches past landmarks such as the London Eye, the Royal Festival Hall and the Globe theater.