Bigger Shouldered Blazers Are Back On The Agenda. 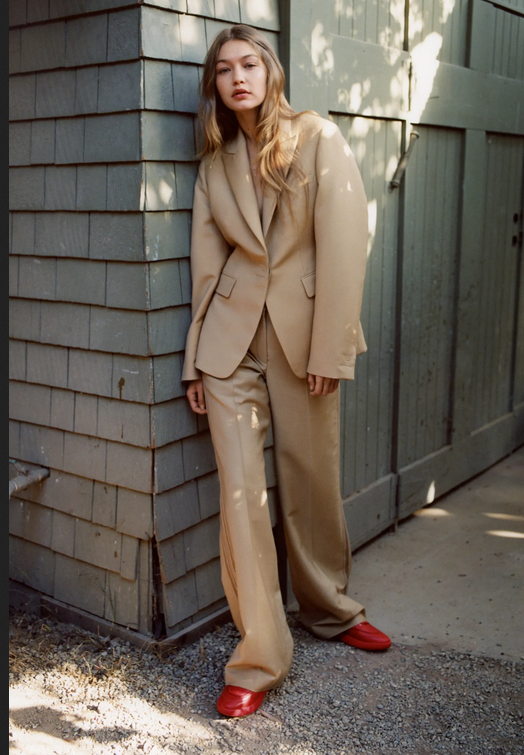 When Love Island ends, you might wish you had listened to our tailoring memo. The big news in blazers is that they’re sizing up for autumn. Seriously. We’re not talking about borrowed-from-the-boys fits, but enveloping jackets with power shoulders that mean business. Boss tailoring can be traced back to Balenciaga, where Demna’s silhouettes always make talking-point fashion and are considered gospel by the likes of loyal ‘chiaga followers Kim Kardashian, Isabelle Huppert and Justin Bieber. The creative director’s outsized black tailoring has become something of a brand calling card and a grungy counterpoint to its second-skin stretch satin pieces. Demna’s consistency in delivering drop shoulder jackets is also a statement of intent from this environmentally minded creative.

At Louis Vuitton, suits were less street, more nostalgic. Nicolas Ghesquière’s shirt and tie pairings, teamed with boxy jackets and roomy trousers, sang of afternoons spent rifling through attics and digging out grandpa’s old daywear. The effect on models such as Hoyeon Jung, Rianne van Rompaey and Mona Tougaard was jaunty and playful. “Sartorially speaking,” said the designer of his teen-spirited collection, “adolescence is a time that’s free of conformity; it’s full of contrasts and resonances.”

Miu Miu’s autumn collection, similarly youth-infused, was inspired by tennis. Mrs Prada’s muse has been wearing white tennis outfits with a hint of boxer shorts visible beneath her boxy outerwear. This look was rebellious and moved the bookish version of Y2K on. Match point to Miu Miu. Suiting got similarly sporty at Gucci, thanks to the Italian brand’s team-up with Adidas. The quickest way to nod to the Trefoil-stamp trend now is to pair your trusty three-striped trackies with a blazer to signal you out as someone who’s taking notes on the sports collab leaderboard. Remember to go big or go home on the jacket front so that people know you mean business when it comes to this season’s hottest trend.

For a more subtle statement than the bold-faced labels, look to Peter Do and his unapologetic focus on suits for autumn. “I like that it takes time to make, that you don’t need to buy many, and that when you find a good one, it becomes your safe space. I want to be that for women,” he told Vogue. Customers go straight to Do for clothes that “make life easier while looking good”. It’s the same story at fellow New York label Khaite, where founder Catherine Holstein’s relaxed takes on the classics have become something akin to catnip for Manhattanites.

If you are waiting for these It-jackets to drop, there are plenty of XL blazers to snap up before the September back-to-school rush. You can wear Raey’s editor-approved jackets for sundowners in the city or take Frankie Shop’s capacious outerwear over your shoulders during wedding receptions. If you are splashing out, then The Row is a great brand to buy from because it does louche proportions really well.