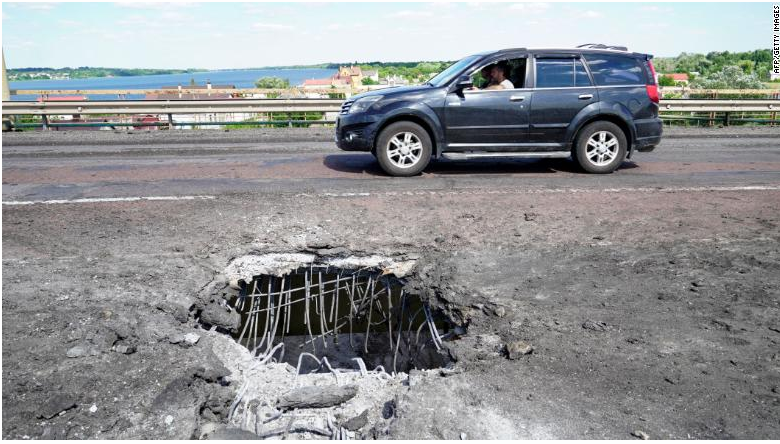 According to Ukrainian officials and Western analysts, Russian forces in the occupied Kherson region in southern Ukraine are finding it increasingly difficult to maintain the flow of ammunition, armor and fuel to front-line units thanks to a concerted Ukrainian campaign targeting river and rail supply lines as well as ammunition depots. The Russians are also moving command posts from the north bank of the Dnipro River southward. Some Russian military units have already relocated south of Kherson city, according to Yuri Sobolevsky, first deputy head of Kherson regional council.

Much of the Kherson region has been occupied by Russian forces since the beginning of Russia’s invasion of Ukraine. As part of Kyiv’s counteroffensive to try to retake lost territory in the south, Ukrainian forces are targeting critical bridges to disrupt supply routes in and around Kherson. The Institute for the Study of War, a US-based think tank, said Sunday that the Russians may be leaving for the other side of the river “to avoid being trapped in Kherson city if Ukrainian strikes cut off all ground lines of communication connecting the right bank of the Dnipro River to the Russian rear.” Videos have appeared on social media in the past few days showing renewed long-range artillery attacks on the Antonivskyi bridge and a road bridge over a dam near Nova Kakhovka, rendering them impassable for heavily armored vehicles. In some areas, there is only one bridge across a kilometer (0.6 miles) wide river as bridges have been destroyed or blocked by fighting at other crossings; pontoon bridges are impractical here.

The Ukrainians have targeted several railway lines that connect the Russian-occupied Crimea Peninsula with mainland Russia. The Ukrainian Defense Ministry has released video showing a large amount of military vehicles and ammunition at the site of a bridge hit by an explosion near the town of Dzankhoy on a major line toward Kherson. The mayor of occupied Melitopol, who is no longer in that city, claims that Russian forces are using Melitopol as a logistics center for transportation and transshipment of ammunition and heavy weapons.

Fedorov, who lives in the Ukrainian city of Kherson and receives information from partisan networks there, says two railway lines from Crimea have been struck in the last 10 days. Residents reported several hours of explosions in Henichesk district, a port area along the Sea of Azov, and at Brylivka further west. According to Ukrainian military’s Operational Command South: “Within the last week we have destroyed over 10 ammunition warehouses and military equipment clusters. These hits do not allow for heavy equipment to be transferred by these bridges.” This does not suggest an imminent Russian withdrawal from Kherson.

Russia has established a series of defensive layers in the Kherson region, including air cover, according to Western military analysts. These layers also include vintage T-62 Soviet battle tanks that have been stationed as stationary artillery pieces in order to provide support in the flat farmlands along the border with Mykolaiv region. Russian forces have attempted counterattacks against Ukrainian units trying to push south into Kherson, with modest gains being made in this region. In order to sustain their operations in this area, Russia needs a constant flow of munitions and fuel. Ukrainian forces have begun using combat aircraft and helicopters in this region; they also use highly accurate long-range artillery systems that are capable of targeting key bridges and railroads. The targeting used by Ukrainian forces is aided by resistance movements within occupied areas.

The Ukrainians have recognized that it is far less fruitful to engage Russian forces in a gruelling battle of artillery and tanks than to use their newly acquired tools and some older ones to hit Russian rear positions and infrastructure.