EU Officials Advised European Leaders To Support Ukraine’s Bid As A Candidate For The EU, But Officials Noted That Their Country Had “A Long To Go Before It Would Qualify.” 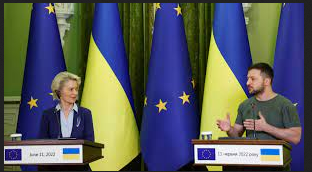 Senior European Union officials will be attending a two-day summit in Brussels on Thursday and Friday, where leaders from 27 EU member countries are expected to vote on supporting Ukraine and Moldova’s European candidacy.

In a press conference in Brussels on Wednesday, an EU official said, “I have not seen a problem on granting candidate status to Ukraine,” and lauded the work of European Council President Charles Michel. The senior official added, “I would like to tell you that ‘it’s a done deal’ and ‘it’s easy,’ but after years of working inside the EU, institutions don’t want to be drawn on a definitive answer.”

I’m confident but cautious too. The official thus said.

Separately, a senior diplomat from an EU country said that “Ukraine and the Commission have done a great job” in preparing for Ukraine’s bid to start the long process of joining the EU, and the diplomat’s country was “happy with the report on the table.” The diplomat tempered expectations for when Ukraine could become a candidate for EU membership by saying that granting Ukraine candidate country status does not mean that Brussels would immediately begin discussing an association agreement with Kiev. The diplomat added that an association agreement would require many more steps before it could be approved by member states.

The diplomat stressed that Ukraine was the only person that could set a timetable for Ukraine to become an European Union member state. When the diplomat was asked about a timeline for Ukraine to become a complete EU member, he said that he doubted there could be one since the conditions were changing, Ukraine must become something else, and Ukraine had other priorities.